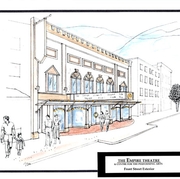 Jensen Building Ltd. was selected the General Contractor for the renovation project of the former McCarthy Theatre in downtown Belleville. Consisting of an original building of approximately 25,000 sq. ft. together with a new addition of approximately 6,000 sq. ft, the doors of the 700 seat theatre opened in twelve months after construction commenced.

Demolition of interior partitions back to outside walls and ceiling;
Structural repairs and upgrades, including significant structural support in backstage area;
Installation of new mechanical and electrical systems to serve the new 700 seat theatre;
Significant finishes throughout, included lounges, lobby, seating area and box office/administration;
Exterior site work, including parking and an “open air” theatre area.

This Project was undertaken in downtown Belleville, presenting Jensen with issues such as noise, neighbouring businesses as well as safety and accessibility. Jensen aligned itself with the owner and worked together to plan, design and complete the Project on time and on budget, which it achieved.

Looking for help with your next project?