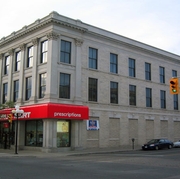 Jensen was selected as General Contractor for a Project in Downtown Kingston involving the conversion of a former Zeller’s department store into a Shoppers Drug Mart and other retail, coupled with a renovation and addition of upper floors to accommodate eighteen (18) new residential units.

This was a complex project, with constraints of time and space, given the site location in downtown Kingston. As well Shopper’s had a static Occupancy Date so delays would expose the owner to significant potential cost. The Project was constructed in two phases to minimize disruption, with the Shoppers Drug Mart and other retail units constructed over a nine month period and then the Residential Units over the subsequent thirteen months.

Looking for help with your next project?